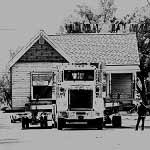 This is not a true story but was written by me for a stand up comedy skit.
I went down well and I was invited to tell the story many times.
I do believe that other stand up comedians have used my story at Tamworth Country Music Festival.
A very funny story of my family’s house moving business in the 1950s
‘Hend’ is an uncommon surname. It is Chinese-Irish. My granddad was a Chinaman, his dad came out from China and lived in Dunedoo NSW, my grandma was Irish. Grandma and granddad never spoke much to each other but they had 9 kids, 5 girls and 4 boys.
My father’s brother, Harry Hend was the brains of the family and with his Chinese energy and his Irish momentum he developed an oversized trucking business and we all moved to Sydney to work for Uncle Harry.
We trucked houses, whole houses in one go.
Uncle Harry had won a tender with the NSW government to move and relocate houses that stood in the way of new highways and infrastructure.
This was in the late 1950s. In those days people stayed home at night and the highways were deserted till early morning except for the dunny man and an odd milkman and us. They did have greenies in those days and they could cause trouble if they saw us moving historic homes.
So we worked at night.
Just after dark the whole Hend family (about 20 of us) would converge on the house. The power and plumbing would be quietly disconnected and the house jacked up well off its foundations.
The front fence was removed and anything available was used to build a runway for the house.
Right on 1.am Uncle Harry would arrive with the truck carrying huge bogies and steel girders.
Like clockwork we would assemble the wheels and girders and strap the house down.
I drove the truck. It was massive, I was not a big fellow and I needed a ladder to climb into the cabin and with the seat fully forward I still had pillows to see through the steering wheel. It had 26 gears, high and low range, 57 wheels, weighed 35 ton and could haul a 50 ton house at 60 miles an hour.
Uncle Harry always let me drive because I was too young to go to jail.
At 2.30 am there was a head count to see that everybody was out from under the house. Then I would ease the massive engine up to 2500 revs and drop the clutch. That’s when the action started; there would be a loud bang, not unlike a car smash, then the screaming of 16 tires and the instant smell of burning rubber. The noise kept up for 30 seconds or more as the 85 tons of house and truck moved slowly out in the direction of the highway.
On reaching the highway the family would disperse ahead to the rendezvous.
Uncle Harry, in the utility was my pilot. He kept me moving. It took 2 miles to gain full speed, straight down the middle of the Hume Highway, turn left at Woodville Road, through the Dog Trap Gates and hammer down towards Parramatta.
It was a fantastic buzz, rumbling along at 60 miles an hour, lights flashing, siren screaming; nothing on the road except Uncle Harry in his utility, 85 tons of truck and house and me.
Then it happened. We got the house jammed under the railway bridge at Parramatta. We were in big trouble. We sat in the St John’s Park not knowing what to do.
The police arrived in their pajamas and that’s when Uncle Harry decided to make a run for it.
We jumped in the utility and started driving north, Uncle Harry would not stop driving. I had never been past Gosford and when he got to Mullumbimby I had had enough, I got out and he kept driving.
Days later I rang granddad, he gave me a phone number to ring in Darwin. It was my Uncle Harry who told me he had found out why the house did not fit under the bridge. It was the wrong house and the people were home.

Apparently the house was occupied by an old couple who were asleep till I dropped the clutch. When interviewed the old man said he thought a terrible storm had hit the house and when he looked out the window he could see all the other houses getting blown away, so he went back to bed and the storm seemed to settle down to a lot of rumbling, he said his wife did not feel a thing, and he only realized there was a problem when he put the cat out.
Well time has passed, I’m still in Mullumbimby, Uncle Harry was last seen in China and the rest of the family moved back to Dunedoo. The cat was never seen again.
Sorry but I don’t know where the house is now.
Len Hend
C 2011