My Dad the Dancer

Dad would not stop showing off. 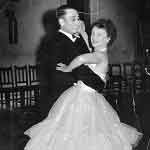 During my childhood I was rather embarrassed with the antics of my father.
He would bring dancing into every conversation, he lived and breathed dancing.
He would dance alone, with an old wind up record player, up and down the front varandah, everyone could see him.
We lived on the main road to Parramatta and my school bus stopped at our front gate. I would get off the stop before.
Mum and dad ran a very successful ballroom dancing studio, the Norm and Dawn studios.
At the boom times they would get over 100 paying students a class.
The teachers, about 5 ladies and 5 gents, would come early to class so mum and dad could give them private lessons.
When the beginners arrived the teachers would teach them and anyone who wished to practice would select a partner.
It was very social and well run.
My first job was to wind the record player, dad would stand at the door as security and mum would teach.
One day on my way home from school my friend asked if he could stay at my house as he had missed the bus.
Rarely did I have friends visit because of my dad’s antics. My mum said yes, I shuffled him into my bedroom, shut the door and he stayed.
He asked, what does your dad do for a living?
I told him that my dad was a nut case.
Every day he is something different, one day he is a postman, next day he is a truck driver, next day a doctor.
He then asked, what was he when you went to school this morning?
I told him he was a ballet dancer, he looked confused but said no more.
Later that afternoon my dad burst into the room dressed in his tails.
Do my tails up son, I’m dancing for the Parramatta mayor tonight, he said.
My friend said nothing again, until a car drove down the driveway past my window.
Who is that?
It’s my dad going dancing, I replied.
My friend looked at me very seriously and said.
He is bad you know you should get him locked up.